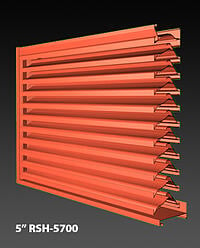 Lets explain what the Louvre classifications mean. BS EN 13030:2001 sets out the guidelines for the testing and classification of all weather or performance louvres. During testing, the resistance to airflow is assessed and the louvres are subjected to 75mm/hr. of water, blown against a 1m x 1m louvre at a velocity of 13m/s. The louvre is then given a 3 part classification:

This classification, rated A – D designates the “effectiveness” Class of the weather louvre against water (rain) penetration. Each class covers a specific range and it can be seen from the table below that a Class A is significantly more effective than the Class B below it:

This classification, rated 1 – 4 designates the louvres ability to allow air to pass through it and is determined by establishing the Discharge Loss Coefficient (DLC) at various airflow velocities. Each class covers a specific range, as can be seen in the table below. The higher the DLC the less resistant to air the louvre is. In simple terms, a hole in the wall with no louvre would have a discharge loss coefficient of 1. The Airflow Class gives a guide to the M&E consultants of how the louvre performs at various ventilation rates and the actual DLC figure is used to establish the actual area of louvre required.

This is calculated by multiplying the effectiveness by the coefficient, giving you an “Overall Performance” rating. It should be noted that this should not be used as the sole determining factor when choosing louvres as it can mask poor weather performance on a louvre with good airflow.

So, that’s the science bit over with! What can be seen is that there are varying degrees of weather protection afforded by louvres and even within the top classification, Class A, there is a range of 1% variation allowed.

Rain penetration isn’t the only factor in choosing a weather louvre however. A solid wall will allow 0 litres of water through it, but it will also allow no airflow! When specifying louvre a balance between airflow and water ingress is needed, so it is vital to first consider the needs of the building (or the room the louvres are being fitted to).

Construction Specialties has over 50 years of experience in designing, manufacturing and installing Performance Louvre, in projects large and small, and will be happy to assist you in choosing the right louvre for your project.